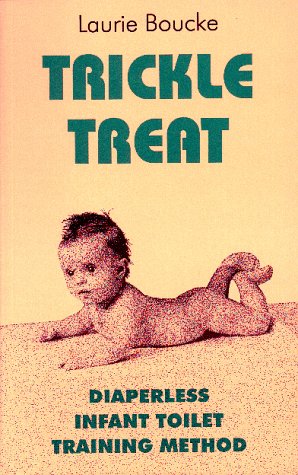 SUMMARY: The title pretty much summarizes this book–it’s a quick look into the idea of training young babies how to use the potty. Many cultures outside of the US use methods similar to this to train their infants to use the toilet at a “young” age.

MY THOUGHTS: I liked this book because it was straightforward and to the point. A friend of mine had said something about “elimination communication” a month or two ago and I’d never heard of it. When I Googled it quickly, the idea sounded strange to me–not putting a diaper on a small baby to train them to use the potty, as young as birth?! Getting pee all over the house? But when I looked into it a little more and even met a few mommies that had done it before, the idea didn’t seem that strange. Because you don’t really go diaperless. Well, you can. But you don’t have to.

I’d already tried the E.C. method for a week with my almost 9-month-old daughter before reading this book. Luckily, I’d been doing it correctly (though I don’t think it’s exactly cut and dry). The simplest way to describe it is this:

I feel like this last bit of “conditioning”, like Pavlov’s dogs, would be a big thing people would use to say this method is not okay. But we train people to do many things, so I don’t see this as a problem.

I have a few more books about this method, though I’m not sure how much E.C. changes between “methods”. Regardless, I’ve had some good success with it in the past couple weeks I’ve been doing it. So we’re happy.