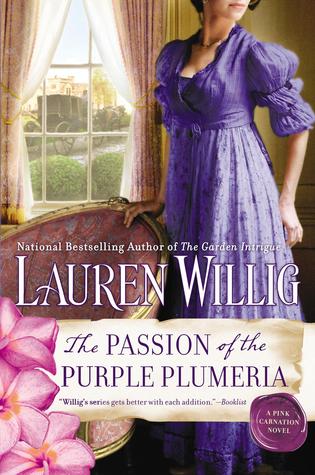 Title: The Passion of the Purple Plumeria
Author: Lauren Willig
Length: 434 pages
Published in: 2013
Genre: historical fiction/romance/mystery
ISBN: 9780451414724
Source: borrowed from library
Reason for Reading: This is the 10th book in a series I’ve been reading since its conception.
Rating: 4/5

Colonel William Reid has returned home from India to retire near his children, who are safely stowed in an academy in Bath. Upon his return to the Isles, however, he finds that one of his daughters has vanished, along with one of her classmates.

Having served as second-in-command to the Pink Carnation, one of England’s most intrepid spies, it would be impossible for Gwendolyn Meadows to give up the intrigue of Paris for a quiet life in the English countryside—especially when she’s just overheard news of an alliance forming between Napoleon and an Ottoman Sultan. But, when the Pink Carnation’s little sister goes missing from her English boarding school, Gwen reluctantly returns home to investigate the girl’s disappearance.

Thrown together by circumstance, Gwen and William must cooperate to track down the young ladies before others with nefarious intent get their hands on them. But Gwen’s partnership with quick-tongued, roguish William may prove to be even more of an adventure for her than finding the lost girls…

My Thoughts: I found this installment to be quite similar to pretty much all nine of the previous Pink Carnation books. Given that much doesn’t change in the way of the major points in the stories from one book to the next–there’s always the girl, who eventually falls for a guy and ends up with him–I’m kind of at a loss for words as to why I still even enjoy the series. I think it probably has to be more because I enjoy novels set in a distant land and a distant time. I mean, I like all of Jane Austen’s books, too, and they all pretty much have the same plot, even if the problems that arise are different. I’m sure that at some point I will become bored with the series, at least if nothing changes–I know we all like happy endings, but maybe an ending where the heroine and her gallant gentleman DON’T end up together would be just enough to entice me. (As the books are set in the Regency era, it’s obviously quite scandalous when sexual things come into play, and maybe that’s why they always end up together–shocking enough a “lady” in 1805 could even consider being impure out of wedlock, but even moreso if they didn’t end up married!!)

One thing I quite enjoyed happened within the first few pages of the book, in which the author made a reference to one of my favorite films, The Princess Bride. She referred to a person long ago being similar to a “Napoleonic-era Dread Pirate Roberts”. The movie has been a favorite of mine for over 15 years now, so I find it funny that, as it randomly has gained more popularity in the last couple of years, references to it pop up willy nilly.