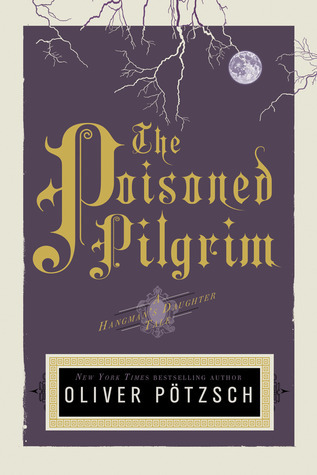 1666: The monastery at Andechs has long been a pilgrimage destination, but when the hangman’s daughter, Magdalena, her doctor husband, Simon, and their two small children arrive there, they learn that the monks have far larger concerns than saying Mass and receiving alms. It seems that once again the hangman’s family has fallen into a mysterious and dangerous adventure.

Two monks at the monastery experiment with cutting-edge technology, including a method of deflecting the lightning that has previously set the monastery ablaze. When one of the monks disappears and his lab is destroyed, foul play is suspected. Who better to investigate than the famed hangman Jakob Kuisl? But as the hangman and his family attempt to solve the mystery of the missing monk, they must deal with the eccentric denizens of the monastery and villagers who view the monks’ inventions as witchcraft that must be destroyed at all costs.

My Thoughts: I think this has been my least favorite of the series so far. As bad as it might sound, I think I was less interested in it because the sexual tension that had been present in the first three is gone, now that Magdalena and Simon are married, and even have a couple of children. I think the children also might have something to do with why I wasn’t as big a fan this time around. That is really awful, considering the fact that I do love kids and am expecting myself. I just don’t think the story was a gruesome as previous installments–while that honestly might have nothing to do with the children playing a small part in the story, I find myself blaming them for it just the same. I don’t remember in the past there being so many plot lines as this story had–there was a “sorcerer” who turned out to not be the only wrong-doer in the story, so towards the end, there were different plots to consider and how they affected each other. Apparently, I prefer a more direct story 😕

As ever before, I wasn’t able to surmise who the major evil-doer of the story was before it was revealed, nor even the other, more minor “bad guys”. Although I had guessed correctly who was the sorcerer’s assistant from early on. And I’d also been correct about something concerning Magdalena from the beginning of the story, though it doesn’t play much of a role in the story. Maybe the next installment?

While I didn’t like this book as much as the first three, I will still be reading whatever comes next in the series. One not-as-great-as-the-others-but-still-good book in a series isn’t enough to deter me completely 🙂