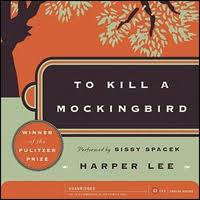 Reason for Reading: I sort of felt like I should read this. For no particular reason, really. I wasn’t made to read this in 9th grade (about 10 years ago) because I was in an honors English course, so I got to read The Odyssey. For some reason, I felt that I was missing out on something.

“Shoot all the bluejays you want, if you can hit ’em, but remember it’s a sin to kill a mockingbird.”

A lawyer’s advice to his children as he defends the real mockingbird of Harper Lee’s classic novel—a black man charged with the rape of a white girl. Through the young eyes of Scout and Jem Finch, Harper Lee explores with rich humor and unswerving honesty the irrationality of adult attitudes toward race and class in the Deep South of the 1930s. The conscience of a town steeped in prejudice, violence, and hypocrisy is pricked by the stamina and quiet heroism of one man’s struggle for justice—but the weight of history will only tolerate so much.

My Thoughts: Not a fan. I’m very glad I wasn’t required to read this in high school because I’m pretty sure that I would have disliked it immensely. As it turns out, I didn’t care for it at the age of 24–wouldn’t have liked it as a 15-year-old. (I wasn’t a very mature reader at that point in time.)

That being said, there wasn’t really any specific reason that I didn’t like it. I felt that the story was slow and not interesting. And I felt the climax(es) of the story came to early, at least considering how much uninteresting story was left after them. (Both climaxes having to do with Tom Robinson’s trial and outcome.)

Thoughts on Audiobook Format: I really enjoyed Sissy Spacek’s voice.
I had a problem with this audiobook, which has nothing to do with the audiobook itself, but with the previous library patron who borrowed it. Basically, said patron didn’t replace the CDs in the correct order, so I listened to a couple out of order. I even actually skipped the third disc, which I didn’t realize until after I’d finished disc 7. Regardless, in the future, I’ll make sure to pay more attention that the CDs are in the correct order!