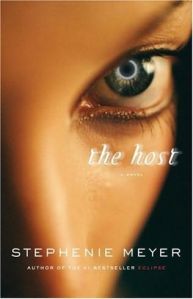 Melanie Stryder refuses to fade away.

Our world has been invaded by an unseen enemy. Humans become hosts for these invaders, their minds taken over while their bodies remain intact and continue their lives apparently unchanged. Most of humanity has succumbed.

When Melanie, one of the few remaining “wild” humans is captured, she is certain it is her end. Wanderer, the invading “soul” who has been given Melanie’s body, was warned about the challenges of living inside a human: the overwhelming emotions, the glut of senses, the too vivid memories. But there was one difficulty Wanderer didn’t expect: the former tenant of her body refusing to relinquish possession of her mind.

Wanderer probes Melanie’s thoughts, hoping to discover the whereabouts of the remaining human resistance. Instead, Melanie fills Wanderer’s mind with visions of the man Melanie loves—Jared, a human who still lives in hiding. Unable to separate herself from her body’s desires, Wanderer begins to yearn for a man she has been tasked with exposing. When outside forces make Wanderer and Melanie unwilling allies, they set off on a dangerous and uncertain search for the man they both love.

This is the first book that I have “read” via audiobook. And I found that I really enjoyed it! I have always loved listening to stories, but I have a hard time actively listening to something while doing something else at the same time. The perfect solution came when my student teaching turned out to be a 40-minute drive one way 🙂 I thought that the 40 minutes would just get wasted, spent only on driving. Then I had the idea to listen to audiobook. I chose The Host because I have wanted to read it for awhile, but it is really long (more than 600 pages).

As you can see from the description taken from Meyer’s website, the book is science fiction, but I love it. I’m not saying I dislike sci-fi, but I prefer certain kinds, like this. It didn’t really seem like an alien invasion while “reading” it. It seemed to me as more a “futuristic” novel than an “alien invasion” novel. I was skeptical at first, having read the Twilight series. I wondered how well Meyer could write an adult novel. But she did beautifully! As I was getting toward the end of the novel, I kept admiring her–and thinking of other authors–for being able to be so creative and imaginative. I thank authors for being creative when I am not. I am so thankful for stories, real or completely fictional 🙂

I would really recommend The Host to any reader who feels they can take the time to read it. It is well worth the time it takes to get through it. Don’t think of it as sci-fi–it is hardly sci-fi, I feel.

**Edit Note: The description also might lead you to believe that this is a romance novel. While there is a small amount of romance (I think), I would not let that put you off if you do not like that sort of stuff. I feel the amount of “romance” is a very minute portion of the book. (It is definitely not like the Twilight romances.)

3 thoughts on “The Host by Stephenie Meyer”